An interview series with leading Motion Picture & Television Industry Composers
Film & Television Composers score music to accompany a motion picture for film or television. This could include dramatic underscore as well as popular songwriting. The traditional role of a film composer is to provide the orchestral dramatic underscore, and only more recently has the popular soundtrack begun to stand on its own.
Where applicable, articles contain a link to

offering additional materials on the subject.
Pictured (Under): "The Wrecking Crew"

3
min read
A- A+
read
Composer Kristopher Carter had been working for the past few years primarily scoring the hit animated series "Batman Beyond". Previously he had worked on "The Batman/Superman Adventures", and also scored numerous independent features. Now he has just finished work on his first major release from Warner Bros., entitled "Batman Beyond: Return of the Joker". SoundtrackNet had an opportunity to talk with Kris at the mixing session for the film, and ask him about his works..
Note: This article was first published on SoundtrackNet on 09/02/2000 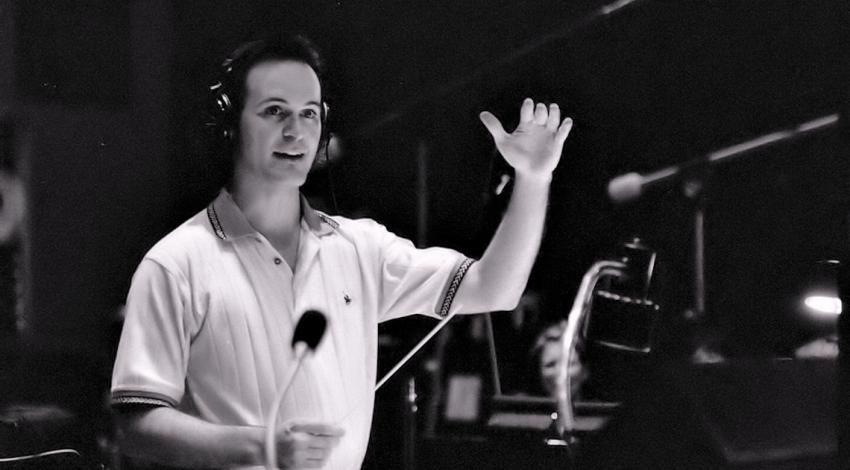 You recently went to the Sundance Institute - what can you tell me about that program?

quote-leftRobert Redford started the Sundance Institute about 20 years ago to help foster the careers of up and coming directors and screenwriters. Recently they added a Composer's Lab to their curriculum. Like the filmmaker program, it was a fellowship - they only chose six people out of many applicants, so it was quite an honor to participate. We traveled to the Sundance resort in Utah, and studied for two weeks with a lot of great film composers. Carter Burwell came out, as did Shirley Walker, Mychael Danna, and George S. Clinton. We also got to meet that year's directing fellows - we were paired up with them, and scored the experimental short films that they shot for their program. It was all very much in a demo format - we were provided with a simple synth setup and had to crank it out in a week! It was a very inspiring program.

How did you get involved with Shirley Walker?

quote-leftWhen I was still in college, I was introduced to Shirley through her son, with whom I played the double bass in the orchestra. I was able to show her some of the independent work that I had done, and when I graduated she offered me an apprenticeship. I came out to Los Angeles and studied with her and did assistant work as well as some writing. Not long after I arrived, she offered me a chance to score half of an episode of "Batman: The Animated Series." The producers were pleased with the music, and I became a full-fledged member of "Team Walker." Along with Shirley, Michael McCuistion and Lolita Ritmanis, we continued working on "Superman" and more recently, "Batman Beyond."

The original "Batman" animated series tended to have large orchestral underscore. How has that scoring approach changed for "Batman Beyond"?

quote-leftThe creators of "Batman Beyond" wanted a new musical direction for the show. They envisioned an edgier techno and rock sound for their youthful hero. Over the course of the series, we have maintained a symphonic sensibility to the techno and synth. We utilize the same approach as we did with the old series - we're just using a different palette of colors.

What is the future of the television show?

quote-leftAt this point, Warner Bros. will only be producing 65 episodes. There are rumors about a possible fourth season for the show, but there is nothing official right now.

What would your dream project be?

quote-leftI would really enjoy an opportunity to collaborate with an adventurous director willing to experiment with the score, perhaps to reinterpret an existing genre or use the music in an original manner.

What instruments do you play?

quote-leftMy primary instrument is piano. In addition to the double bass, I also learned enough to be dangerous on the trumpet, violin, mandolin and guitar.

What upcoming projects do you have?

quote-leftConcurrently with the last season of "Batman Beyond" the Walker team will be doing a new WB show called "The Zeta Project." Zeta was a robot that was designed to kill, but doesn't want to kill anymore, and so he's trying to escape from the government. It's best described as Blade Runner meets The Fugitive, and it will feature an orchestra blended with high-tech electronics.

I'm also doing an independent feature called Treading Water that was shot in the Boston area. It's an intimate story about a family that has to come together over the Christmas holiday to work out their problems and differences. The score will feature a chamber group with two pianos and two cellos.

Do you have any advice for up and coming composers?

quote-leftMy advice would be that if you truly want to pursue a career in film scoring, really study it - immerse yourself in it. There is a very rich tradition of great film music, and the more you can learn about the craft, the better equipped you will be to carry on this tradition.

About: The score to "Batman Beyond: Return of the Joker" was released through Rhino Records on October 17, 2000. The film came out on home video on October 24, 2000. "Treading Water" premiered later that fall, and "The Zeta Project" aired early in October of 2000.

Thanks to Allison McGuire Young and Jamie Kwan for their help in setting up the interview.

Republished from:
Soundtrack.net
The Art of film and Television Music
Release date: 09/02/2000
All Rights Reserved
Photo camera Credit
* Dan Goldwasser
** Dana Ross
** Lolita Ritmanis
caret-left There are ( 4 ) Videos for you to enjoy caret-right