8
min read
A- A+
read
Editor's Note:
In many respects Stephen Elliott was one of the inspirations for this feature at IndustryCentral. Whenever we saw Stephen playing one of his characters, we were inspired by how easily we accepted him in which ever role we found him. Although it took us quite a while to pin he and wife Alice Hirson (see October 2001) down to acquire the materials to publish this profile, we think I was well worth it... We trust you will too! 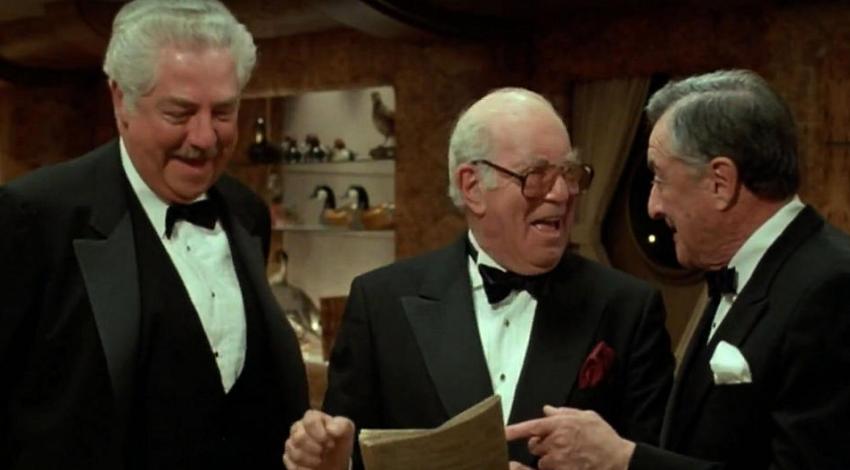 Stephen Elliott was born on November 27, 1918 in New York City. He died on May 21, 2005 (age 86) in Woodland Hills, California. He performed literally thousands of roles on stage and screen for well over half a century. His characters have shared the big and small screen with some of the most famous and decorated actors of all time.

His long and decorated stage career, displayed his talents On and Off-Broadway, playing varied characters of Shakespeare, Ibsen, Arthur Miller, Sean O'Casey, Jean Anouilh, and on and on.

His first professional appearance was as "Duke Manten" in the National Company of "The Petrified Forest" - a role also played on stage and screen by the late Humphrey Bogart. After finishing his road tour he returned to New York and enrolled in the Neighborhood Playhouse were he studied under the guidance of Sanford Meisner and where he was discovered by Guthrie McClintic who was responsible for his first New York stage appearance in a comedy entitled "Spring Again" which starred that expert comedienne, the late Grace George.

Since that time his career had been shared On-Broadway, Off-Broadway, Motion Pictures, and Television. His outstanding performance in a Equity Library production of the late Sidney Howard's "Paths Of Glory" resulted in his first major assignment on the New York stage in "Command Decision" opposite the late Paul Kelly. Among other outstanding stage productions On-Broadway in which he appeared are Shakespeare's "The Tempest" with Vera Zorina, Arnold Moss, and Canada Lee; "The Wonderful Journey" with Sidney Blackme; "The Shrike" with Jose Ferrer; "Living The Life" With Alice Ghostley; "Roman Candle" with Robert Sterling; "The Disenchanted" with Jason Robarts, in which production he played the leading role during Mr. Robart's absence from the cast; "The Irregular Verb to Love" with Claudete Colbert and Cyril Richard;the Broadway production of Anouilh's "Traveler Without Luggage" in which he Co-Starred with Ben Gazzara, and as Peter Ustinov's Alter-Ego in the comedy, "Photo Finish".

Being a great admirer of Sean O'Casey, Stephen appeared in several of O'Casey's plays Off-Broadway including: "The Purple Dust", "Drums Under The Window", and the Paul Shyre adaptations of "Knock On The Door", and "Pictures In The Hallway".

Stephen Elliot, however may best be known for his Big Screen performances as the "Police Commissioner" in Charles Bronson film "Death Wish", or again playing a Police Commissioner in Milton Katselas' "Report To The Commissioner". And who can forget his gritty performance as the would be father-in-law in the two Dudley Moore "Arthur" comedies. Also notable performances in "The Hospital", the Arthur Hiller/Paddy Chayefsky comedy/drama starring George C. Scott, and Robert Wise's thriller "The Hindenberg" with an All-Star cast which included George C. Scott, Anne Bancroft, Gig Young, Burgess Meredith, Charles Durning, Richard A. Dysart, and Katherine Helmond.

Stephen was no stranger to the small screen either, having appeared in hundreds of TV episodes, mini-series and TV Movies, highlighted by: "Captain Video And His Video Rangers" (1949), "As The World Turns", "A World Apart", "Columbo", "How The West Was Won" the mini-series, "Young Joe, The Forgotten Kennedy", "The Ordeal Of Patty Hearst", "Jacqueline Bouvier Kennedy", "Dallas", "Perry Mason", and "Chicago Hope".

When I first started in the business of acting, it wasn't about the Movies or Hollywood, it was about learning a craft on a stage bathed in the warmth (hopefully) of a living, breathing, laughing, and crying audience. These values seem to be missing today! I think our best performances today still come from those with a strong background in the theater.

Luc Besson on "The Fifth Element"

Robert Newman - Finding his own path!